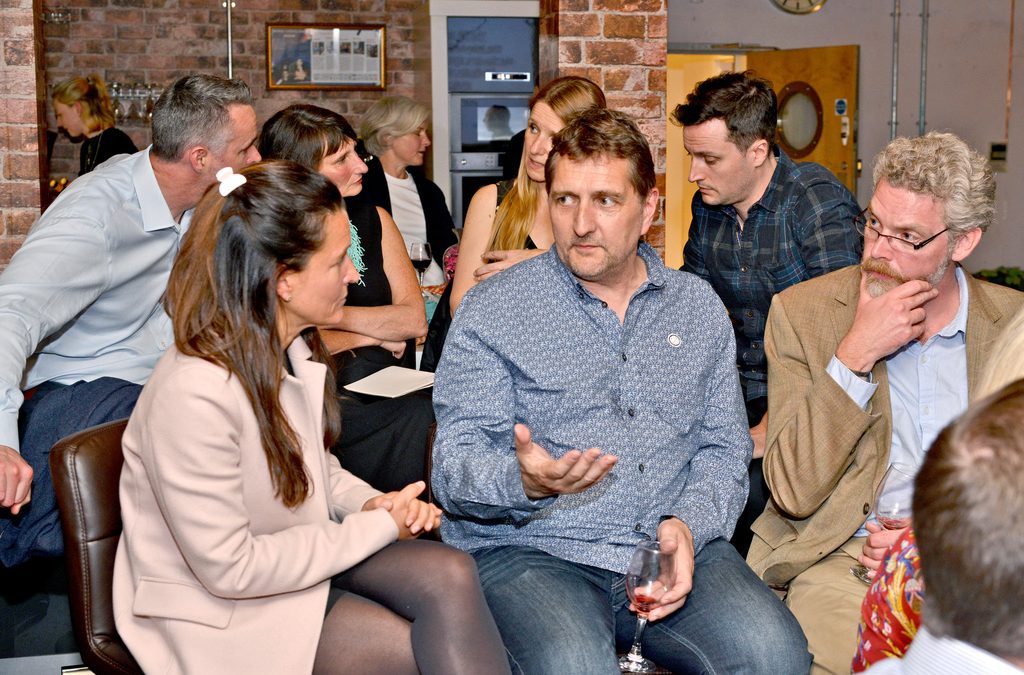 In the heart of Soho at the offices of Jigsaw24, CEOs, MDs and Board Level Directors from some of the top live and film agencies are gathered, a glass of wine in hand, to discuss the most pressing issues facing the communications industries. A vigorous but short discussion, Jenny Jenkins, EVCOM’s CEO promises the parents in the room they’ll be home for “bathtub and bedtime.” Andrew Winterburn is facilitating, and he begins with a clear message: “This is your time.” Immediately, he opens the floor to our attendees. “What,” he asks, “are the challenges that you are facing in the industry?” Attendees suggest a range of challenges, Brexit, of course, is mentioned, retaining company culture during growth, skills and particularly their retainment, generational differences and how to define quality, are all raised as important talking points. As Andrew points out, the audience is a good mix of live and film to begin this discussion from a variety of angles.

It is now time for the first topic of the evening. “The UK position in the international market, particularly given the changing landscape and political uncertainty.” Andrew expands to ask the questions: “Where is the business coming from? Where is the budget holder sitting?” The room shows a near equal split between agencies who are predominantly commissioned by UK clients, and people predominantly commissioned by international clients, including Europe, the USA and the Middle East. However the collective message in response to Brexit is one of positivity. The UK has been seen as one of the leading countries in this industry, the “go to country”. Not that it’s time for complacency, but over 50 years of extreme political upheaval in multiple directions, this position has been held. “Creative disruption is what drives the whole world forward,” posits Rick Stainton (Smyle), urging us to embrace the needs and changes of an uncertain global environment. Cultural disruption, argues Rick, can be a positive thing, because it makes people think and see differently. Dagmar Mackett (drpG) adds that international expansion is not something that Brexit has forced, but the natural product of an expanding company looking for business opportunities abroad.

The second talking point of the evening focuses on the search for, and retainment of, talent in a diverse and forward thinking way. Michael Hirst makes a vital comment about the changing immigration laws, which deem £30,000 the minimum salary for a worker to be considered skilled and therefore put a time limit of a year’s stay on anyone earning less. Freelance work is coveted by some, but others are held at a disadvantage by it, working full time hours but not receiving benefits such as holiday and sick pay. On the other side, one attendee notes that “some of the best talent in this industry are clearly freelancers.” The fact that they are freelancers mean that key agencies get to work with and share these top skill sets. Dagmar also begins a conversation about whether university and apprenticeship standards are fit for purpose, whilst advocating for their usage.

Finally, guests are faced with the trend of integrated communications agencies, rather than niche agencies. James Thompson (Myriad Global Media) points out an interesting development: management consultancies have started buying agencies. He argues that we don’t need to get better at making films, but improve our ability to understand the demands of a client. Dale Parmenter (drpG) agrees saying, “It’s all about relationship and embedding ourselves in with the client.” He attributes this priority of client-agency relationship to the growth of drpG. Rick adds that experiential agencies have cottoned onto the importance of this relationship faster than some larger agencies, leading in these developments.

When the discussion is over, the guests stay around for a drink and further conversation. Thank you to Andrew Winterburn, our host Jigsaw24 and all our attendees for a lively and engaging discussion about some of the key issues facing our industries today.