EVCOM Awards 2021: how the corporate film sector is responding to the times 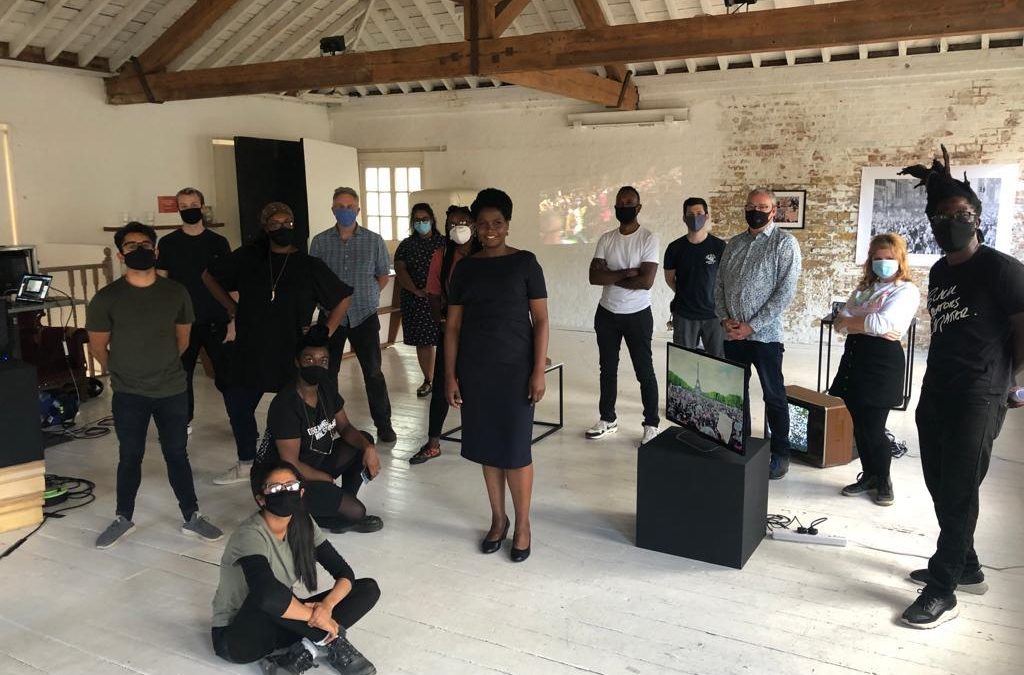 The climate emergency and racial injustice were themes running through many of the communications films being celebrated at this year’s EVCOM Awards. Is there more to it than ‘corporate wokism’? asks curator Patrick Russell.

EVCOM’s annual awards always open an impressive, interesting window on to the world of organisational communications, as filtered through the talents of British filmmakers. In addition to the live events industry, EVCOM represents the so-called corporate film sector – one of the best-kept secrets among UK creative industries.

Their awards always fascinate for at least two reasons. They give us clues as to the key movers and shakers in a crowded landscape of production companies and agencies, and clues as to how organisations – from multinational brands to campaigning NGOs – reflect the temper of the times in the films they commission and the briefs they give.

It’s no surprise that at this year’s awards on 25 November, COVID reared its head in both subject matter and production techniques, nor that climate change, the experiences of minorities and racial justice issues are moving closer to centre frame. Whether you applaud or abhor ‘corporate wokism’, you need to pay attention to its screen manifestations and the creative skills applied to them.

A super-varied list of clients and producers saw 2021 awards go to everything from a highly entertaining pro-vax public information film, made for Imperial College by Stella and starring Elton John and another special guest, to an elegiac industrial documentary by Shell’s internal video unit, marking the end of North Sea drilling platform Brent Charlie. And from a thoughtful campaign for the seafaring community by ITN Productions to an engrossing science documentary by Inspired Films and CDM for Merck.

Three producers emerged with the most gongs – one long-established industry leader and two that arrived on the scene a few years ago and are now in the firmament of today’s top producers. I asked all three to take us through their winning projects.

The Edge Picture Company, celebrating its 30th year and its  whopping 15th year as New York Festivals’ production company of the year, continues to produce impressive, varied creative work for an extremely mixed client base. One winning project this year was the finely executed Disability Matters. Winning EVCOM’s learning and development category, it was produced for a Network Rail training initiative aimed at improving engagement with disabled customers and colleagues.

“Network Rail wanted to develop best-in-class disability learning, challenging staff preconceptions about passengers and colleagues,” recalls Pete Stevenson, The Edge’s executive director. “The result is designed to help employees understand disabled people and their everyday challenges, to use appropriate language, and to adapt their own behaviour and Network Rail services appropriately.

“Learners needed to understand that what’s being asked of them isn’t difficult: never assume [you know what’s needed], always ask. Different film styles brought learning to life – from real passenger testimony to short stories to get the learner thinking about their assumptions and behaviour. We set out to represent disabled people honestly, not patronise them, avoid anything that felt like blaming the learner, and use simple, conversational language to show employees how to make a positive difference.”

The Edge was also recognised for a more commercial and public-facing campaign. The online documentary series What It Takes, which links the arts to the making and drinking of tea, won gold awards for cinematography and for use of film in a digital campaign. This series exemplifies the return of the ‘sponsored documentary’ form as a genre valuable to the rise of branded content, sitting somewhere between corporate and advertising film.

“Ahmad Tea needed a campaign idea that would appeal to a new generation of tea drinker,” says Stevenson. “So much tea advertising is about softness – refreshment; experiencing the moment; a middle-aged tone. The brief was to disrupt this and speak to younger consumers seeking out something different and more authentic storytelling. In the words of Ahmad’s founding owner, blending great tea takes ‘true artistry’.

“The heart of the campaign focused on a simple question: what does it take to be an artist? The campaign answers this by looking at different practicing artists – with a modern twist, like the brand. Three young people each striving for perfection. Ahmad Tea connects with the artistic struggle – so running parallel with these stories is the story of an Ahmad Tea ‘artist’. These artist stories formed the core of the campaign: four short ‘hero’ films in which each artist discusses ‘what it takes’ – the hard work, sacrifice, attention to detail, and successes and failures.”

Last but not least, The Edge’s film The Time Is Now, made for PwC, was one of the most impressive, intriguing films of the night. Here’s where the corporate world meets Black Lives Matter, and it’s fascinating to compare this with an earlier Edge mini-masterpiece, Ask Yourself, made five years ago for Deloitte. They register a shift from the diversity and inclusion agenda to a harder-edged one where race inequality is more assertively confronted.

Stevenson says: “PwC wanted to raise awareness across their global network around racial and social injustice. This film had to be honest and thought-provoking. It highlights the need for a fundamental global shift with regard to inclusion and diversity, moving towards a workforce reflecting all of society, removing barriers to recruitment and promotion, and supporting one another to speak out against inequality.

“Our creative response was based on the premise that everything about this subject is already known. The statistics are there, initiatives have been done – yet the problem persists. By highlighting all we know, we reinforce the urgency of addressing these issues now.

“Our crew comprised almost exclusively Black creatives, including writer, director and producer. They shot during the COVID-19 restrictions, necessitating innovation. Still images on the walls and archive on a vintage TV set helped bring the story to life and gave the film a rich multimedia feel. The response has been humbling. Meaningful conversations on difficult subjects have flowered around the world.”

Media Zoo is one of those ‘challenger’ agencies of a few years ago now competing at the highest levels. Managing director Rachel Pendered reflects: “We have made a conscious choice to move towards projects that use our creativity as a force for good. We believe we’re developing a canon that deals with the issues of the day: marginalisation, loneliness, the healing of our environment, and diversity and inclusion. It’s work that matters. It’s work we’re proud of.”

That work included their own Black Lives Matter project, this one for HSBC, which won a silver award and looks at the experiences of some of the banking giant’s ethnically diverse employees, and their own gold-winning PwC project, Open Mind. A fascinating complement to The Edge’s film, this is a montage mood-piece intended to attune viewers to the possibility of their own unconscious bias.

Pendered says: “Open Mind challenges the viewer through statistics and depictions of the science of human nature. From a creative standpoint, the intricacies and speed of synaptic connections had to be represented visually and sonically with pace forcing the viewer to almost play catch-up. The impact of this treatment was for the message to simultaneously appear surprising while remaining self-evident. PwC told us the video needed to instigate a range of emotions: discomfort, intrigue, curiosity, shock and excitement. It was important for us to make our people feel proud of our firm for actively addressing unconscious bias given the current global context.”

Media Zoo’s other gold winner (for best direction and in the health and safety category) was the excellent Invisible Me. Commissioned by the Disabilities Trust, this is a training film about the effects of brain injury, which was distributed by the charity to multiple public, private and third sector organisations.

“The brief was to transform a two-hour workshop into an engaging learning experience for NHS workers, prison staff and probation workers,” explains Pendered. “The aim: drive awareness and increase understanding of brain injury. We wanted to convey what it really felt like for Jade and Satnam. Knowing that speech can be impaired with a brain injury, we looked at art therapy as an effective communication tool. We see drawings by these two animated on the screen, which are full of expression and meaning, giving us a glimpse into their world, while the footage shows the sparse environments of men who’ve been cut off from society. This illustrates the impact of brain injury in a way no statistic could do.”

The Disabilities Trust’s Vivienne Francis commented: “The film was quite a departure for us. It presents brain injury in a bold, compelling, fresh way with cut through. This can only help us in changing the perceptions and behaviours of practitioners, and beyond.”

Plastic Pictures have likewise in just a few years grown from promising startup to big beast of the comms world. They already had awards in Cannes and London under their belt before culminating (for now) with EVCOM’s top accolade. Both their big winners were produced for Unilever. One of the most prolific corporate users of film, the consumer goods giant has contracts with many production companies, but Plastic has clearly become a top choice for ‘big’ projects requiring high creative and production values. Consider Our Purpose, in which Plastic apply the gripping pacing that’s become their trademark to their client’s brand amplification (the category for which it won).

“Our Purpose captures the ethos of Unilever,” says Sara Cooper, Plastic Pictures’ creative co-founder. “All around the world, in every kitchen, bathroom, fridge or laundry you’ll find a Unilever brand. We set about documenting the micro-moments of consumers using their purchasing power to help make sustainable living commonplace. Our in-house director, Jack Harmsworth, excelled himself with all the self-shot footage and our editor, Rob Alexander, showed real intuition when crafting together the visuals, paying special attention to creating an immersive soundscape.”

Having already picked up two category golds (for best internal comms film and for best use of film in an event), Plastic triumphed at the end of the ceremony by taking the coveted top prize for best film of the year. There Is No Finish Line is – for a corporate film – unusually abstract in purpose and form. Used to open Unilever’s Compass Live Event, where they announced their current global strategy, it then went online for the public with minimal surrounding explanation. It’s a stylised record and interpretation of a piece by performance poet Sophia Thakur.

“The absence of a client logo on There Is No Finish Line tells the audience the work is authentic and unadulterated,” says Cooper. “Unilever briefed us to do something different, trusting us with the concept, which set out to deliver sustained engagement that didn’t patronise the audience. It’s Sophia Thakur’s intellect, sensitivity and flawless performance that is the real winner. Her words gently evoke, captivate and charm the audience with optimism and urgency. The director, Kevin McKiernan, crafted a subtle white space for Sophia’s words to ruminate in. Together we created a moment, reminding everyone of the wonder of nature and reasons why we all need to back it.”

The film was premiered at live events before going online. It looks great on the web but its boldly austere visual style works even better on the big screen – which is where the industrial filmmaking tradition began, well over a century ago.