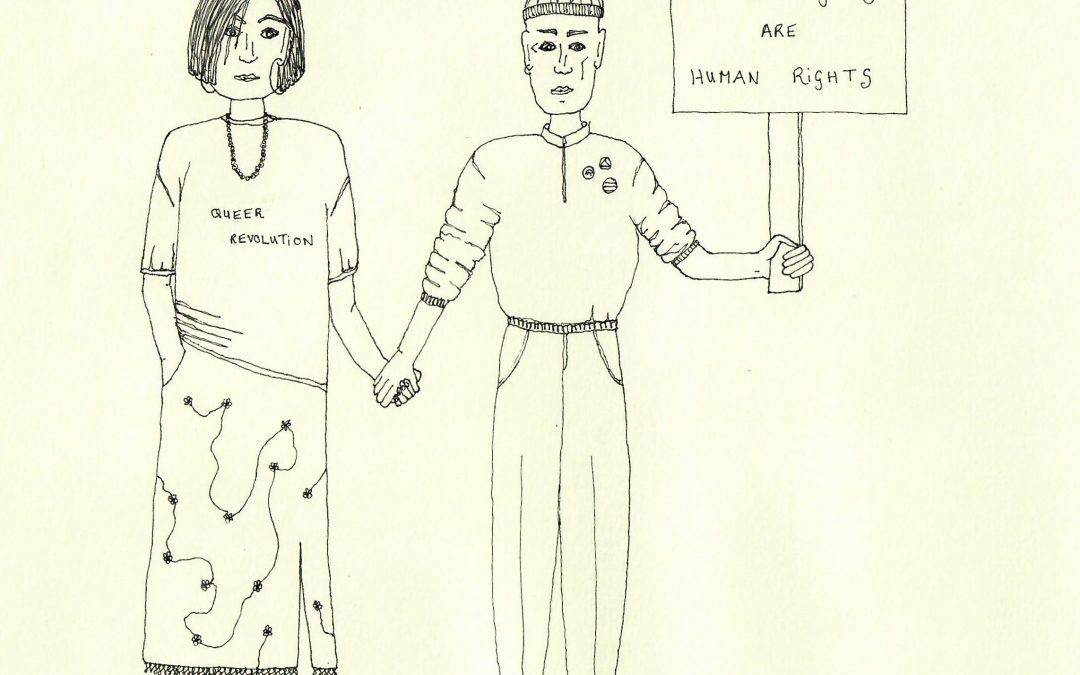 Happy pride month! This weekend would’ve been London pride, a march through London’s streets that is both a protest for and celebration of the LGBTQIA+ community. So to help you celebrate indoors we’ve compiled a list of 10 inspiring works by queer creatives from film to books to art, that we think you ought to know about:

What: Travis made this show after someone threw a burger at them whilst shouting a transphobic slur in Waterloo station. The show is about burgers, about how trans bodies are treated and survived, and about our complicity in transphobia.

Who: Travis Alabanza is a performer, writer and theatre maker. They have spoken and performed around the world, in venues such as Tate, ICA, Barbican and Harvard University, and are a leading creative and activist voice for the trans community. In the last two years they have been noted by numerous publications, such as ARTSY, ID AND MOBO _AWARDS, as one of the most prominent emerging queer artistic voices, and also listed in OUT as an influential queer figure, and appeared in campaigns with MAC X ASOS. Find out more about their work here.

2. The Slow Fix by Ivan Coyote

What: A short story collection about the every day, about family an childhood and love, that subverts stereotypical gender narratives.

Who: Ivan Coyote is the award-winning author of twelve books, the creator of four short films, and has released three albums that combine storytelling with music. Ivan is a seasoned stage performer, and over the last twenty-five years has become an audience favourite at storytelling, writer’s, film, poetry, and folk music festivals from Anchorage to Australia. Ivan often grapples with the complex and intensely personal issues of gender identity in their work, as well as topics such as family, class, social justice and queer liberation, but always with a generous heart, a quick wit, and the nuanced and finely-honed timing of a gifted storyteller. Ivan’s stories remind of us of our own fallible and imperfect humanity while at the same time inspiring us to change the world. Find out more about their work here.

3. Songs My Enemy Taught Me by Joelle Taylor

What: Songs My Enemy Taught Me (Out-Spoken Press) is a collection of poetry inspired by fusing Joelle’s own experience of sexual abuse with the stories of refugees, prisoners, young mothers and other survivors of sexual assault and domestic violence. It is a record of the struggle women face globally in the 21st century.

Who: Joelle Taylor is an award-winning poet, playwright, author and editor. She has performed across the UK as well as internationally, both for the British Council (Zimbabwe, Brazil, Botswana, Australia and Singapore) and on solo projects across Europe, in venues including the Globe, the Royal Court, the 02 Arena and Buckingham Palace. A former UK slam champion, she founded the national youth slam championships SLAMbassadors in 2001 for the Poetry Society and was its Artistic Director and National Coach until 2018. She founded and is the Artistic Director and Lead Mentor on Borderlines – a new international spoken word project that links 10 UK cities with 7 European countries to discuss the theme of ‘borders’. Find out more her work and experience here.

4. Dykes to Watch Out For by Alison Bechdel

What: Dykes To Watch Out For is a comic strip which became a countercultural institution among lesbians and discerning non-lesbians all over the planet. Bechdel self-syndicated Dykes to Watch Out For for twenty-five years, from 1983 to 2008. The award-winning generational chronicle has been called “one of the pre-eminent oeuvres in the comics genre, period.” (Ms. magazine)

Who: Alison Bechdel is a writer and comic book artist. Her work is concerned with the overlap of the political and the personal spheres, the relationship of the self to the world outside. As well as the comic strip, she has published several memoirs in the form of graphic novels. Fun Home: A Family Tragicomic was named as Time magazine’s Best Book of 2006, and was adapted into a Broadway musical which won five Tony Awards. Find out more about Alison’s work here.

5. Portrait of a Lady on Fire by Céline Sciamma

What: Set in late eighteenth century France on an isolated island, this film, written and directed by Céline Sciamma, tells the love story of an aristocrat who is having her portrait painted, and the painter who is painting it.  It won the Queer Palm and Best Screenplay at the 2019 Cannes Film Festival.

Who: Céline Sciamma is a French screenwriter and film director. Her films which include Water Lilies, Tomboy and Girlhood, have won awards around the world at Cannes Film Festival, Sundance and Berlin International Film Festival.

What: This is the debut poetry collection from kemi alabi. Titled, the lion tamer’s daughter it has been selected as a boaat press, button poetry, and vinyl 45 chapbook prize finalist, and will be published by yesyes books august 2020.

Who: kemi alabi was born on a sunday in july. their poems and essays live in boston review, the rumpus, guernica, catapult, black warrior review, best new poets 2019, the breakbeat poets vol. 2 and other warm places. kemi believes in the world-shifting power of words and the radical imaginations of black queer and trans people. as cultural strategy director of forward together, they build political power with culture workers of color through programs like echoing ida, a home for black women and nonbinary writers, and annual art campaigns like trans day of resilience. Find out more about their work here.

What: An online magazine for LGBTQ women and non-binary people, featuring articles on queer creativity, pop culture, sex advice, film and television reviews and more. Check it out here.

Who: The magazine was founded in 2009 by Riese Bernard and Alexandra Vega and is run by a growing passionate team of people.

What: Spaghetti is a song by musician CJ Run. “Let’s get one thing straight, I’m not,” they rap in the opening bars of the song. This is one of their older songs, but it’s the song that spread CJ’s cult following beyond Illinois.

Who: CJ Run is a non-binary singer, rapper, songwriter. A trailblazer. Born to an Afro-Caribbean family in Germany, and hailing from the United Kingdom, music was always at the forefront for CJ. By age 13, grime, British hip-hop, RnB, and electronic music had possessed them. With a deep understanding of pop sensibility, and enough hooks to last a lifetime, CJ Run’s music is the inner monologue of a black queer 20 something in the 21st century. Find out more about their work here.

9. Oranges Are Not The Only Fruit by Jeanette Winterson

What: This semi-autobiographical novel tells the story of a girl called Jeanette, who as a child was adopted and brought up by her mother as one of God’s elect. Destined for life as a missionary, she falls for one of her converts. At sixteen, Jeanette decides to leave the church, her home and her family, for the young woman she loves.

Who: Jeanette is an English writer, who became famous with her first book, Oranges Are Not the Only Fruit. Since then she has written novels, plays and journalism, and received multiple prizes for her including the Whitbread Prize for a First Novel, a BAFTA Award and the LAMBDA Literary Award. Find out more about Jeanette Winterson and her other works here.

10. I Am A Woman and I Have A Penis by Reece Lyons

What: I Am A Woman And I Have A Penis is a poem about being trans, which Reece performed at the finals of the Roundhouse Poetry Slam 2018. The poem went on to viral online and has been viewed over 3.5 million times.

Who: Reece Lyons is a Transgender Writer and Performance Poet based in London. She graduated in Theatre & English Literature from The Brit School for Performing Arts and Technology in 2017, since then she went on to become a Roundhouse Poetry Slam Finalist in 2018, where her poem went viral online and has been viewed over 3.5 million times. She is currently a Resident Artist at the Roundhouse, where she is developing her first one woman show. Find out more about Reece here.