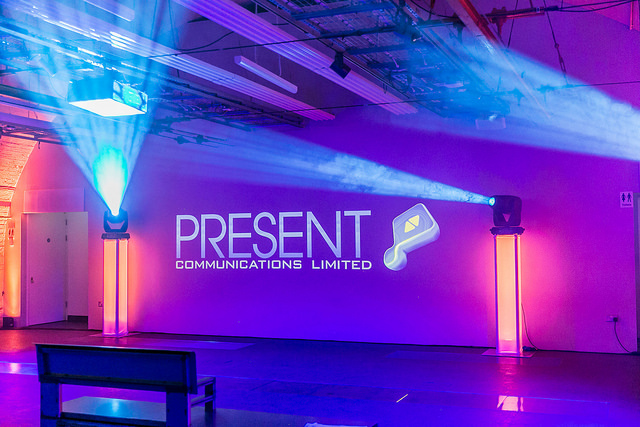 A London-based events support company has been named a Small Business of 2020 by Lloyds Bank after pivoting its business model during lockdown.

Present Communications started out offering an audio and visual equipment hire service for conferences and other events but, by the beginning of last year, around half of the business was focused on video conferencing and webcasting. The 10-strong team, led by managing director Kieron Garlic, looked set for a busy 2020 after building its own webcasting platform.

Despite an initial spike in demand during the first couple of weeks of lockdown, when companies were switching to virtual conferences rather than cancelling already-laid plans, most of the events industry soon shut down.

Kieron, who started the £1m-turnover business in 2007, recalls: “We were advising customers with existing commitments to host virtual events instead, but at the time many people thought things would quickly return to normal so decided it was better to postpone.”

Present Communications’ revenue for March and April dropped by 95% but, by September, bookings began to increase as conference organisers realised the industry would be affected for a lot longer than first anticipated and were starting to take virtual events more seriously.

The company, after securing a Bounce Back Loan from Lloyds Bank, built four virtual event studios in its Wimbledon office to make the most of the return of demand by streamlining its operation to focus exclusively on virtual conferencing, and has now seen revenues rise back up to around 75% of pre-pandemic levels.

Now Present Communications has been named a winner in the Lloyds Bank Small Business of 2020 awards, which celebrate small and local businesses across the UK and their inspiring energy and resilience in meeting the challenges of 2020.

Almost 900 businesses up and down the country were nominated by their local communities and 24 winners were picked based on how creatively and quickly they adapted to events since March, and how they went over and above expectations.

Their prize is £10,000 worth of social media support and advertising as well as a business mentoring session to help develop their growth plans.

Kieron continued: “Last year was extremely difficult for the entire industry, and 2021 will no doubt have many of the same challenges, but we’ve put ourselves in prime position to support virtual events, and revenue for December was actually higher than the year before.

The conference industry has become almost completely virtual. With the infrastructure we’ve put in place and the experience we’ve gained in the last 11months or so, we hope we’ll be creating brand new roles that didn’t exist in our business this time last year.”

Gareth Oakley, Managing Director of Business Banking at Lloyds Banking Group, added: “While 2020 was tough for so many, inspiring stories have emerged from the shadow of the pandemic of businesses up and down the country showing resilience, innovation, and a fighting spirit. Kieron and Present Communications are perfect examples of what can be achieved when talent and ambition meet perseverance, reflected in the nomination for this award.”

Congratulations from EVCOM to the team at Present Communications!