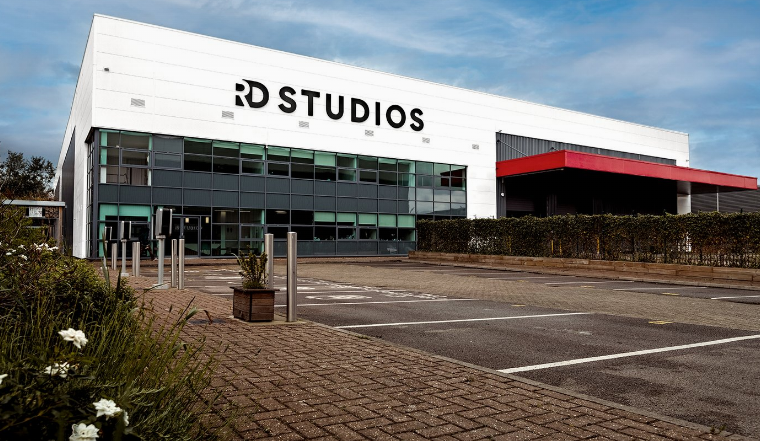 RD Content recently opened RD Studios, a new independent 45,000ft squared studio space in London. Set to be the largest sustainable studios in Europe, the studios have already played host to TV and film productions, corporate film and major events. Ryan Dean, the founder of RD Studios, and Stephanie Hartog, Managing Director of RD Studios, took the EVCOM team and a handful of our members around for a guided tour, before answering some questions for us about the space.

We arrived in the beautiful reception area having crossed the large carpark (which has already been used by clients for outdoor productions) and the insect hotel – the first of many sustainable features the building has to offer! Ryan and Stephanie greeted us and began the tour. We peered into several of the meetings rooms that clients can also hire, and then into the studios themselves. Each of the five studios studio has a dressing room installed into it, and the huge spaces boast automated trusses, sound-proofing, drive-in stage doors and more. It was a pleasure to see these brilliant studios and to hear about Ryan’s plans for the future. Read our interview with Ryan below:

Tell us about a few features of the studios that you, and the clients you’ve had in so far, have been really excited about.

The studios are located in a great location for productions. Park Royal has a large amount of suppliers including cameras, lights, props and catering.

Each studio is sound proofed and has fully automated truss included as standard. Each stage offers complete climate control. Furthermore, each stage offers great vehicular access, along with a large amount of outdoor space available for productions.

Can you tell us a bit about the process of building these studios, and how you went about it?

These are studios built by producers for producers. That’s why it was important that we took complete ownership of the design and build stage. We setup a bespoke construction team, dedicated to building sustainable, creative spaces. By taking all of the construction in-house we were able to have greater control in the design and execution of every element, from the way power is distributed through the site through to ensuring that each studio has its own bathrooms and shower facilities.

Sustainability has been something you’ve considered in a big way when building these studios. Can you tell us about what makes these studios so sustainable, and why it’s been so central in your thinking?

The entire industry needs to rethink how it approaches the way we work, and this was central to our thinking. If we don’t address issues relating to climate change, then there won’t be an industry for us to work within in the future. Our building gets a large amount of its power from the mass of solar panels on the roof of our building. Our site also has rainwater harvesting and also offers electricity c charging for vehicles.

What would you say to film and events companies who haven’t considered using a studio of this size before?

We have been able to host both large and small productions already in the studio, from a single talking head shoot on a smaller stage through to 720 people attending a large, global sports event. If you haven’t worked in a studio of this size then please get in touch and we would be delighted to give you a tour and assist with your production plans in whatever way we can.

We are delighted with the feedback we have received for the studios. We’ve hosted corporate, commercial and some of the world’s biggest streamers and stars in the first six months of being open. We are currently in the process of looking for and securing a couple of sites in London and New York to build larger facilities.

Find out more about the studios here.